9 days with accomplished photographer and tour leader Tim Baskerville
Photograph the quiet side of Ireland ~ County Mayo.
Tour limited to 12 passengers.
New accommodations hotel and spa walking distance to center of Westport with lively traditional Irish music sessions each evening.
Everyone now has ensuite accommodations. Upgrade available for waterfront rooms.
Relaxed & flexible itinerary to make the most of the opportunities that come your way.

*U.S. dollars based upon minimum of 8 participants. There is a small group surcharge of $400 if 5-7 participants. We try to accommodate travelers who request single accommodations, as well as travelers who are looking for a roommate. If a single room is requested (subject to availability), or if we are unable to find a suitable roommate, there is a single room surcharge of $345.

Your home away from home is a lovely hotel on the Quay (harbor) of Westport, County Mayo. It is walking distance to the quaint town center, with its many shops and pubs of Westport. There is a pool and optional spa facilities are available. You can also upgrade your room to have a view of the Quay, additional cost $250 per room for the 7 nights in Westport). You will enjoy traditional Irish breakfasts and dinners during your stay. Lunch will be at various restaurants and pubs, or we can stop in...

Your home away from home is a lovely hotel on the Quay (harbor) of Westport, County Mayo. It is walking distance to the quaint town center, with its many shops and pubs of Westport. There is a pool and optional spa facilities are available. You can also upgrade your room to have a view of the Quay, additional cost $250 per room for the 7 nights in Westport). You will enjoy traditional Irish breakfasts and dinners during your stay. Lunch will be at various restaurants and pubs, or we can stop in town and have a picnic lunch wrapped for our daily excursions in the field. Transportation is provided in a roomy tour van, which is large enough for both the group and our equipment.

The itinerary is set in the unspoiled villages, rugged ancient abbeys, broad peat lowlands, and the dramatic coastline of Western Ireland. The soft pastel shades of the mountains and clouds appeal to the artist and photographer. These natural landscapes, along with the people render this Isle a place of inspirational beauty. We will visit places you could never locate on your own — tiny villages, hidden beaches, castles, and ancient abbeys. 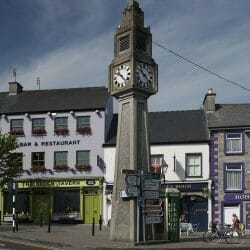 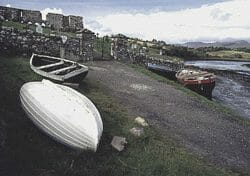 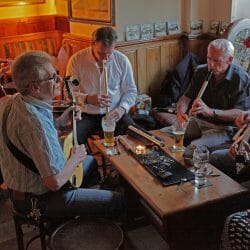 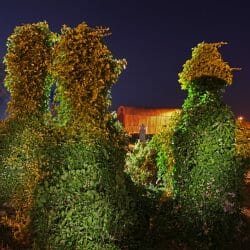 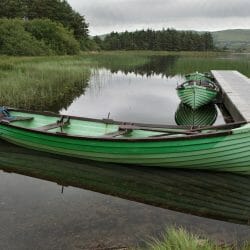 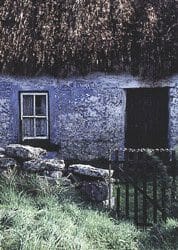 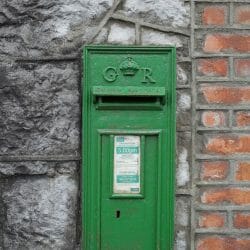 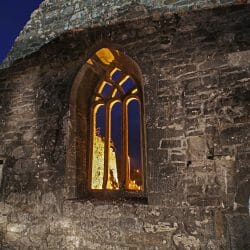 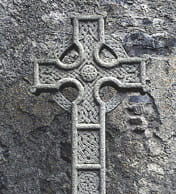 Tim did a great job with the diverse skill levels of the participants. In addition to his photographic knowledge he also has a lot of knowledge of the area, its culture and history. Olcan is definitely a cultural treasure trove of history, geography, myth, and humor.

Tim was available for as much (or as little) instruction as was needed on an individual basis. He is an excellent photography leader, and a great guy. Olcan is the BEST! Really enjoyed him as a tour guide, musician, and person. This was a wonderful experience, a lot was packed in to the 10 days we had.

Before taking The Nocturnes workshop, I had been shooting at night solo” for about two years. But the inspiration and enthusiasm that I took home from the workshops took my night photography to a whole new level. The best things about the Nocturnes workshop were the slide shows of both historical and contemporary night photography, the enthusiasm of the instructor, and personalized instruction during the three great night field trips. Also, this was the only photography workshop I’ve taken where I really enjoyed my time shooting with the group, instead of wanting to get it over so I could get home and work on my photography alone.”

I’ve had a few instructors at UC Berkeley Extension – only Tim continues to keep in touch with his students, forwarding call for entries, chances to have further exhibitions, and continuing education via the website The Nocturnes.”

Your journey to Ireland begins with an overnight flight from the home to Shannon Airport, Ireland.

You will be met at Ireland’s Shannon International Airport and driven north to Westport, on the shores of Clew Bay. After lunch relax, check in to the hotel and explore the nearby countryside. Depending on the time of year there may be an opportunity for the group to photograph the sunset over Clew Bay. Westport Hotel (D)

Each day you will visit some of these typical areas from your home base. There is no possible way to visit all of them, so your tour leader and guide will plan each day considering the interests of the group.

Your lodge is a 15-minute walk to the center of Westport, which has several pubs with lively traditional Irish music each evening. Westport and Newport capture the flavor of true Irish towns with their tree-lined canals and colorful shops. After a stop in Westport, drive to Murrisk Abbey, at the foot of Ireland’s Holy Mountain, Croagh Patrick. Later in the day you will be at the ocean on the west coast of Mayo at a remote rocky shore called Barnabawn Point. Your last stop of the day will be at Tully House, a private residence at the end of a quarter mile tree-lined avenue. There is an old mill along the Bunowen River, a short walk from the house.

Another day spend the morning photographing in and around the town of Cong. Photo locations include Ashford Castle, Cong Abbey, the forest and river, as well as the town itself. After lunch you will have the opportunity to photograph an area of rolling hill, sheep, and a myriad of stonewall, on a hillside flowing down to Lough Corrib. The picturesque village of Cong was the setting for John Wayne and Maureen O’Hara’s film The Quiet Man. The King of Connacht founded the abbey ruins in the twelfth century. In 1198 the last High King of Ireland died in the abbey.

Another day, visit one of the few remaining round towers in Ireland, Turlough, standing amid a field of ancient carved gravestones. If there is a rainy day, the new Museum of Country Life, one of Ireland’s National Museums, is well worth the stop. Later in the afternoon photograph the glacial erratic boulders at Lough Cullin.

Photograph in the morning along the shores of Doo Lough, visiting two locations. After lunch in the town of Louisburgh, spend the afternoon photographing in the Sheeffrey Hills, a place where you must be careful not to disturb the leprechauns who inhabit the forest.

Burrishoole Abbey is a great place to start one of your days. Nearby is Carrigahowley Castle, one of the many strongholds of Grace O’Malley, the adventurous sixteenth century Pirate Queen. Later in the afternoon visit Letterkeen Forest. Westport Hotel (B each day, D three evenings)

Leave early this morning, driving south to County Clare, where you spend the evening in Ennis. Prior to Ennis, you will spend time photographing in County Galway near the town of Gort. There lies a 16th century Norman castle with a small cottage attached. The Irish Literary Revival began near this castle – in Coole Park, an estate owned by Lady Gregory where she hosted the likes of George Bernard Shaw, W. B. Yeats and J. M. Synge. It was a haven – a place of retreat for William Butler Yeats.

Ennis is a charming riverside town with colorful storefronts and narrow cobblestone streets. There will be plenty of time to photograph this lovely village and its architecture. Overnight Ennis or Shannon (B)

After breakfast this morning, say good bye to your new friends in hopes of seeing them again some day. Board your afternoon flights for home. (B)

England Lake District and Beyond